We are so lucky here at Acorn 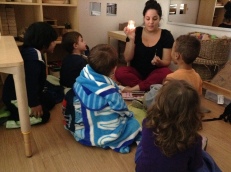 because we have the opportunity to work with amazing people that come through the school each day. We are eclectic and share our different experiences; each teacher brings something unique to their practice. Crystal, who has been a part of our family here at Acorn for over 5 years spent some time working in a Waldorf School this past summer and shared some of her experiences with us in the first week of school. In hopes of engaging the children in stories and inspiring them to use their imaginations she introduced them to Fairy Stories during story time. She would go through a similar ritual that she would perform at Waldorf where she sings a song with the children to summon the story fairy and then lights a candle to show her arrival. The song would go like this:
Fire flick fire,
Fire Fairy

The children learned the song very quickly. They seemed to be intrigued by the very idea that a fairy could live inside this candle. They would whisper, “she’s here” ,“there she is”, “I want to blow out the candle”, “Can we have a fairy story?”

What I loved most of all was the bonding time for the children and myself. They would save a space for each other to sit and be ready and attentive to the story that was being told. It was such a lovely way to start the year and build the relationships that would help ease their transitions being back at school. What I did not anticipate was how their love for this story time would grow. The children were then inspired to tell fairytale stories from memory to the class, a literary opportunity that showed me just how meaningful this learning experience could be. Where would this take us?

For days later the children began to request more and more fairy stories and I wondered if this would have to become a regular occurrence. We began to collect fairy artifacts such as wings, sparkly wands and material. What was so mythical and intriguing about fairies that compelled the children to want to know more?

We formulated questions about fairies, as they had become a popular topic of conversation in our classroom. The children wanted to wear the fairy wings as they went about their daily play and investigations. I wondered what wearing the wings meant to them? I would continue to observe and see if any explanations would unfold. What I did see was the children bursting with energy, experimenting with dashing, jumping and flying when they would first put on the wings. There was a respectful exchange of the wings between each other as they helped each other take them off and on.
I wondered if the different coloured wings meant something different to them? 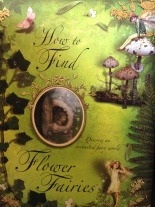 When I shared the details of our fairy inquiry, I discovered that so many people had had a connection to fairies in some aspect. Our art teacher Maria had shared with us her daughter’s love for fairies as well as a beautiful book called “How to Find Flower Fairies”. The book is beautifully written with some wonderful imagery and artifacts that lead you to believe that somewhere in the past fairies have existed. We then dove into an in depth investigation of just what the mythical creatures were all about. Because, if you ask the children they each might tell you something a little different…

What do fairies look like?
For our first experience with our fairy study, the children built on their knowledge and connection to fairies. We 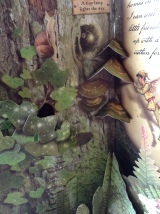 provoked their thinking to see what they did know or perceive fairies to be like. They worked with our art teacher Maria to come up with what they thought would visually represent a fairy. They attached real flowers, acorns, and other natural materials to a paper background. They also used coffee filters, leaves and ribbon for the wings. Maria shared with them some research from our fairy books that fairies actually cover their bodies with natural things like leaves to disguise themselves and wear acorn hats to protect their heads. N.M. decided to incorporate playdough and ribbon into his idea, as he wanted to make “a trampoline for the fairies to jump on incase she falls”. Perhaps the “new fairies might need something like this if they are learning to fly” Maria added. A.M. decided to make “a bed for the fairy beca

use the fairy needed a bed to sleep in” he used coffee filters, flowers, tape, ribbon, a foam plate and playdough- as a cushion at the bottom. N.M. Also used his playdough as a cushion. S.C. made her own fairy, giving her some flower petal shoes and dried flowers for hair. N.M. made an intricate carving in his playdough for the fairies to “hide for night from bad guys”. The mention of “good” and “bad guys” was a recurring element in their play; we wondered if there was a connection that would emerge about this as we went deeper into the study.

In our second experience, Maria worked with the children on making a home for the fairies out of a tree stump, natural materials and decorative embellishments that we thought would be fairy-like. The children continued with the intention of making things for the fairies such as beds, doors and entrances. They reasoned with how they would go about it, “How could we put a hole for the fairies to go into the bark? Maybe like a screwdriver?” N.W. “The fairy beds are going to be up there and they’re going to be nice and cozy. And there’s a little hole here so the fairies can go in” N.W.

After they constructed the beautiful house for fairies, we wondered…

Would the fairies come visit us now that we had built them a home and studied what they wear and what they like?
We continued with more experiments, experiences and questions to summon the fairies. The dialogues that emerged were provoking, some children believed that they had seen a fairy, and others did not. We continued to ask questions like “Do you have to see a fairy to believe in them? And, “Do you believe in fairies?” and they had very different theories. N.F responded “No, because maybe they’re pictures that’s moving”. N.M thought, “Yes, I think they’re real. I’ve seen them before in a book. A.H referred to the information we had read about in the book, “I believe the leaves are falling, I don’t like when the fairies are dropping the pine cones on our heads”. N.W “No, because I never saw the fairies before.

It seemed to me that “seeing is believing” was the question at hand here.

We will see what theories will emerge in the next few weeks.

← Looking Beyond the Obvious