Explorations of “Me-ness”: Exploring Our Self-Portraits 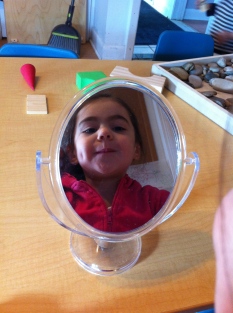 “You yourself, as much as anybody else in the entire universe, deserves your love and affection.” (Gautama Buddha) 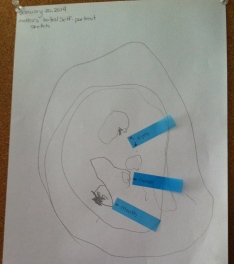 portraiture with preschool age children, their reactions are often baffled. I’ve often heard questions like; What are they learning? Why are self-portraits important? Do they even grasp the concept of a self-portrait?. All of which are valid questions.

My response to these questions often begins with a simple question of my own. Have you ever observed a child when they are given a mirror to look into? At any age a child reacts to the reflection in the mirror. For very young children we can see expressions of confusion, questioning, thinking and interest at who it is that is looking back at them. Slightly older children can be observed making different facial expressions, often being silly, and engaging in dialogue with themselves. For even older children you can begin to see them identifying parts of their faces, examining differences between themselves and others, identifying shapes and contours, and engaging in more advanced thinking and questioning. 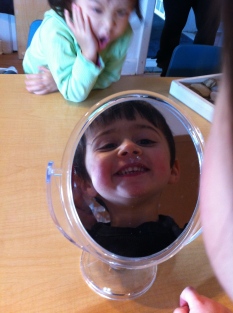 By exploring their “me-ness” (coined by Loris Malaguzzi,) whether working with educators or independently, children are learning a great deal about themselves and are enhancing various skills. During the exploration of “me-ness” 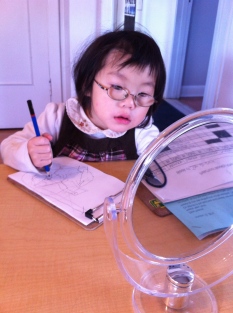 children are developing their observational, expressive and reflective skills. In working one-on-one with their educators, they are building positive reciprocal relationships with one another as well as a positive relationship with themselves.

The society in which we live places a tremendous amount of weight on appearance and status. Through various media forms, we often receive messages that if you don’t look a certain way, dress a certain way, or act a certain way you may be judged in a negative manner. For children this can also be the initial experience of a some form of bullying. Based on what we learn from news forms or through social media, the frequency and severity of bullying seems to have been on the rise over the past few years. According to the Public Health Agency of Canada: 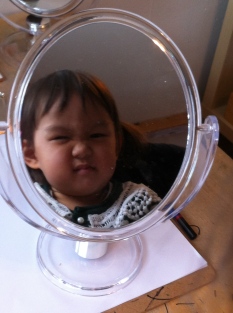 “Bullying is a relationship problem. It is a form of repeated aggression where there is an imbalance of power between the young person who is bullying and the young person who is victimized. Power can be achieved through physical, psychological, social, or systemic advantage, or by knowing another’s vulnerability (e.g., obesity, learning problem, sexual orientation, family background) and using that knowledge to cause distress. As a relationship problem, the young people who bully learn to use power and aggression to control others, and the young people who are victimized become increasingly 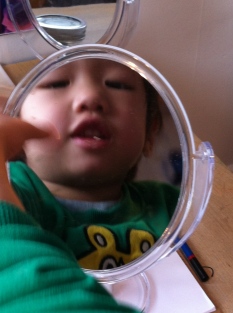 By focusing on the study of our self-portraits I am hoping to emphasize the unique and individual characteristics and features of each child. I have found that society has tried to move away from embracing our uniqueness and individuality to trying to mold us to be carbon copies of one another and I personally do not agree with being a carbon copy of anyone else. We were born unique and I feel that it is important for that uniqueness to shine through regardless of what others believe. Children, like all humans, are different from one another, meaning that they are as equally important as everyone else and do 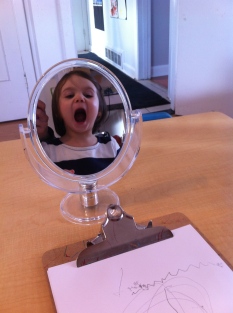 not deserve to be treated in mean, hateful and disrespectful ways by any person young or old. It is my belief that in order for children to grow to love and respect others, they must first love and respect themselves. If I can assist children in the process of building that love and respect for who they are and what they look like, then I feel that I am helping to lay the foundation for them to love and respect others regardless of differences. If the exploration of “me-ness” and the study of self-portraits supports this, then I say why not work on a project such as this. If gaining a deeper love of themselves is the only thing they learn during the course of this project, then I feel that I have done my job as not only an educator but as a human being. After 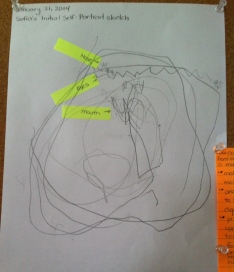 all, this world would be a much better place if we all learned to love, respect and accept one another. 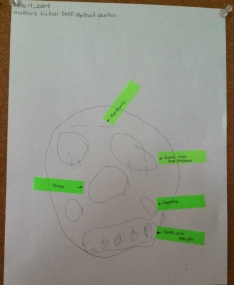 ← Reggio Inspired Practice Second Annual Summer Intensive 2014
“To nurture a garden is to feed not just the body, but the soul.” Alfred Austin →